It speaks of times gone with its marks, corrosion and signs of handmade manufacture all coming together to produce a unique and one-off piece of aged craftsmanship.

The skills used in Antique Ironwork are far from dead but they are now the remit of specialist tradesmen.

This is the restoration story of an interesting Antique candelabra that had been long forgotten and left unloved for many decades.

I was lucky enough to come across the jumble of dirty, random and forgotten old handmade parts online. These old metal parts are blacksmith made, the material used is wrought iron which is really very thick, heavy and has been beautifully hammered and teased into shape. 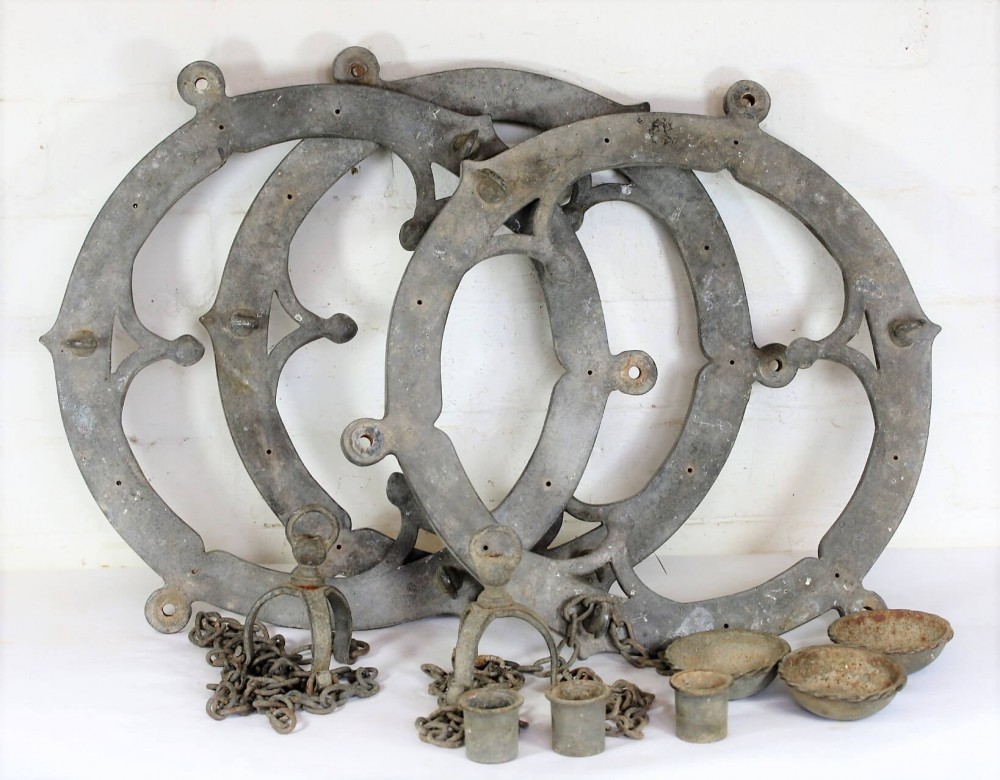 Here is the jumble of old parts that would once again become an Antique candelabra. 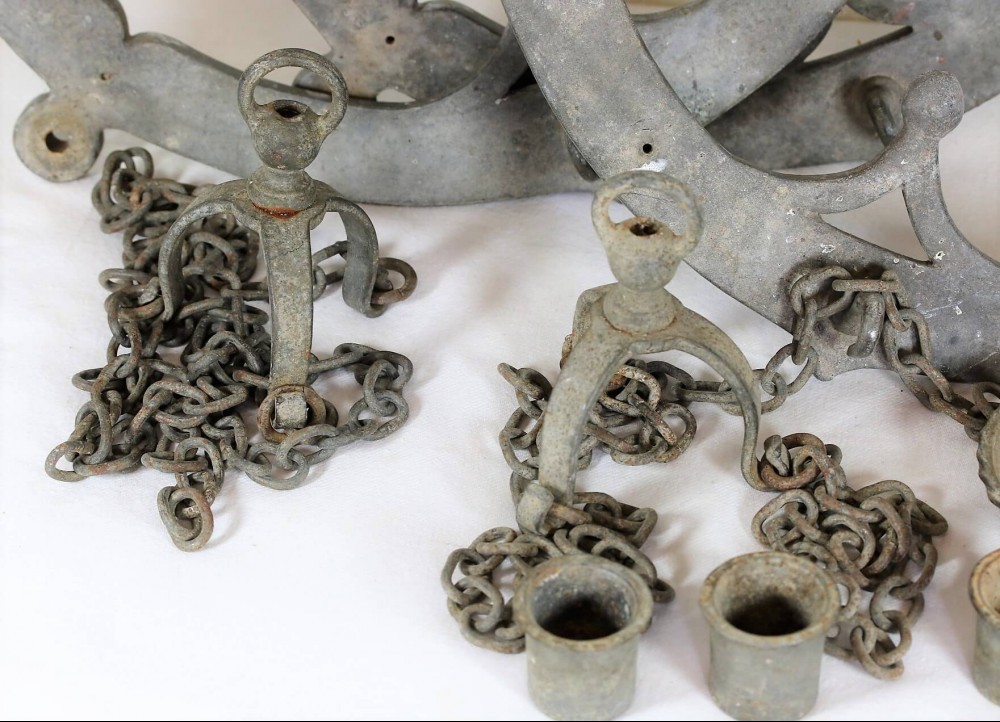 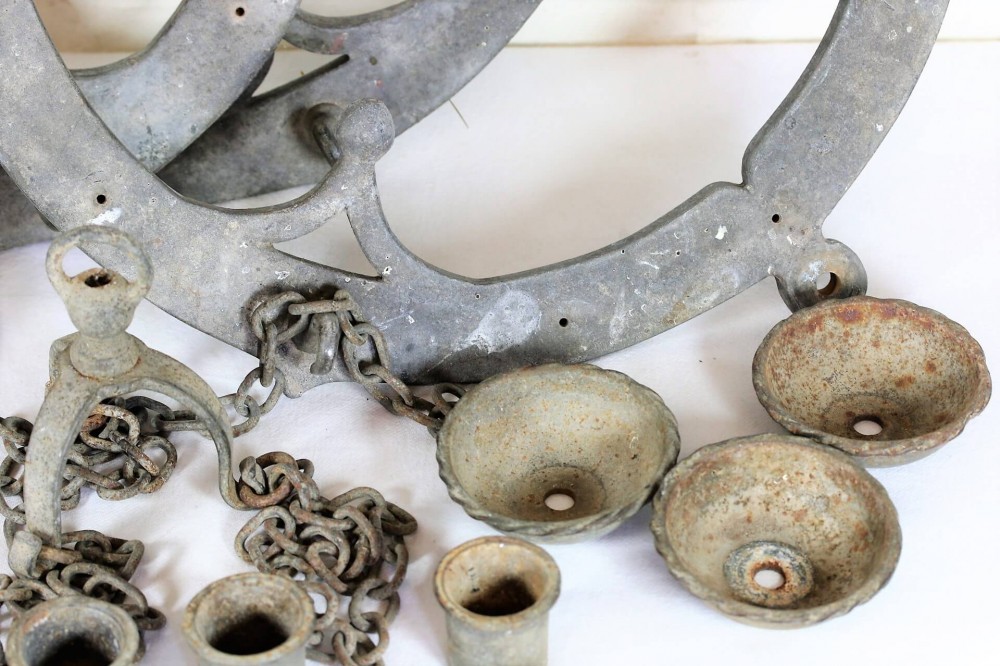 Hopefully, you can see through the dirt and grime and notice some potential in this mixture of candlelight chandelier parts.

This fantastic mixture of bits and pieces had been salvaged many years ago from the refurbishment of a semi-religious and world-famous sacred dance studio in the Southwestern corner of England.

These old candle lighting parts were covered with decades of dirt and baked on grime, luckily there was very little rust as the blacksmith who originally made the candelabras gave them a coat of something that protected the metal well during years of inactivity.

The first task was to figure out what could be made from this box of bits and pieces. The person that saved these from the skip did a great job of salvaging everything he could.

After sorting out the bits and pieces it appeared that there were the parts available to make one complete Antique candelabra from the box of bits and pieces. 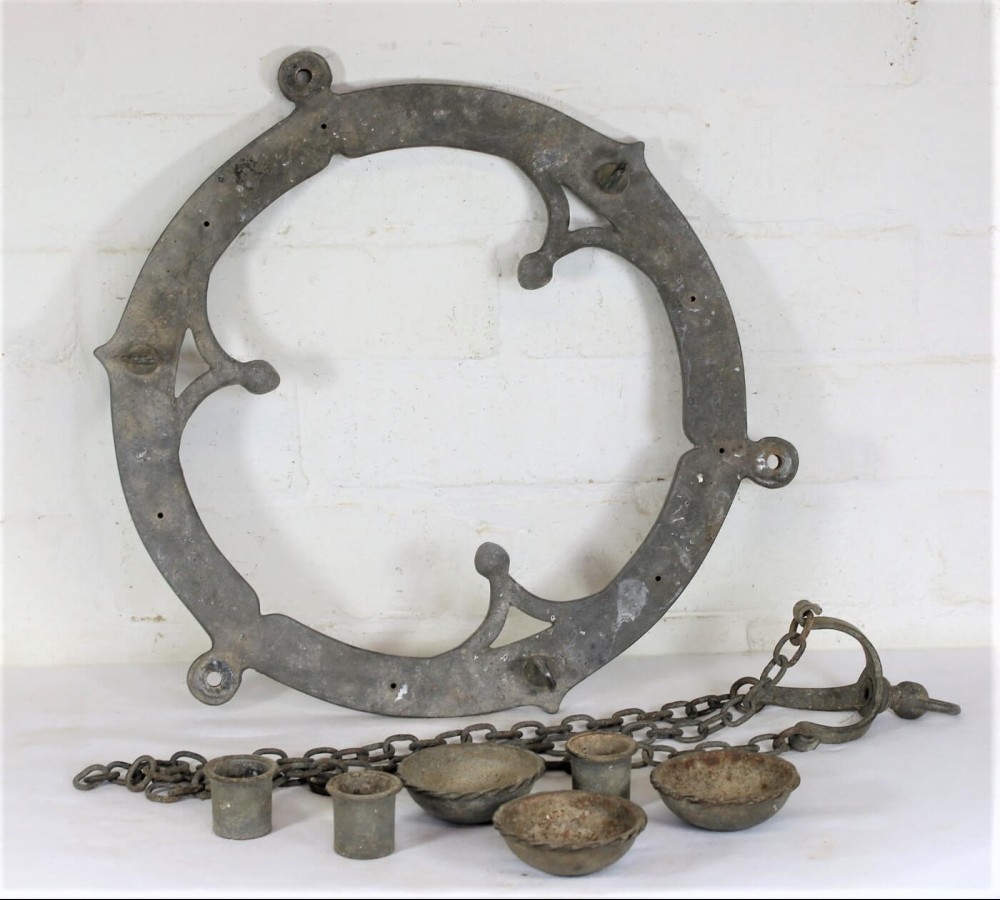 The sorted pieces that were chosen to make a “reborn” candlelight chandelier.

On closer inspection it became clear what the original layout of the candelabra would have been; the main body of the light was the ring section which was beautifully made. The ring had 3 predrilled holes set evenly around its circumference. There were also three candle cups and three wax catchers.

At the top of the main ring were three beautifully made stylised hooks which had been attached and peened into position, these hooks attached to three lengths of a chain which in turn attached to a three-arm ceiling mount/rose.

All of these old Antique parts were made from wrought iron. All had little details and signs of the original blacksmith’s art and skills. The main ring is massively engineered with a thickness of 9mm.

The only items missing were three iron finials and iron threaded rods which would have been used to secure the candle cups and wax catchers to the main ring.

One of the hidden benefits of keeping a box of “spare parts” from old lighting is that you always have a choice of bits and pieces that can be used to fill a gap in a project. After a rummage, I managed to find three vintage finials made from Brass that could be used to hold the original iron pieces together. Brass was not ideal but with a bit of effort, and a touch of forced ageing, I was confident that these vintage brass parts could be made to blend in well to the Antique ironwork.

The next job was to assemble the parts together, this was fairly straight forward but the original ring and parts did need the drilled holes opening out slightly to accept modern threaded rods, this is easy to do with a sharp drill bit a steady hand and a pair of safety goggles.

After an hour’s drilling and spanner work, the reborn Candle chandelier started to take shape. 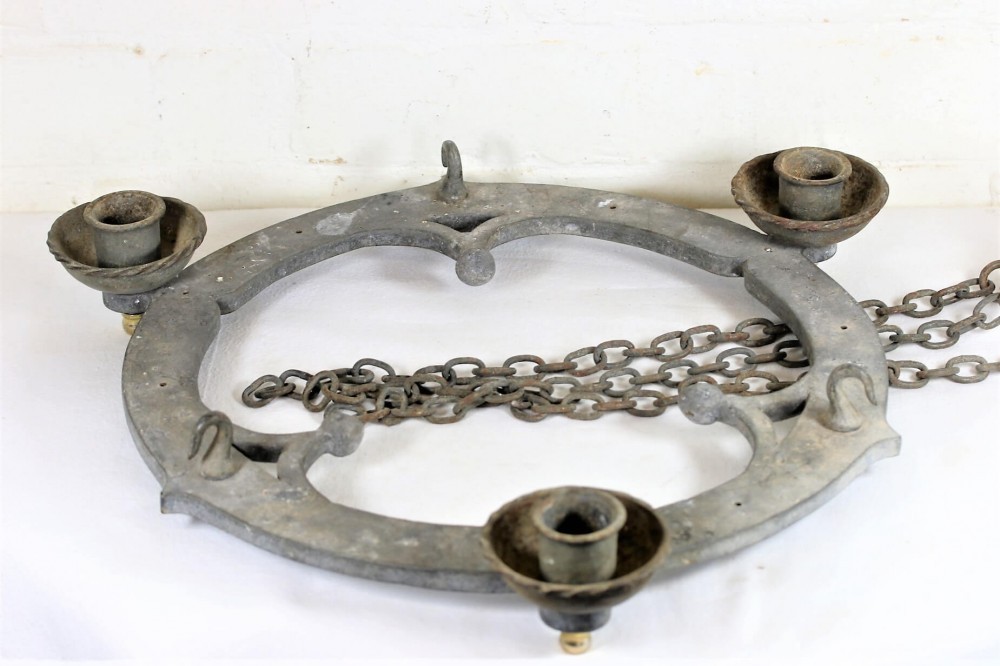 Here is the Candelabra assembled and awaiting final cleaning and polishing.

It was now time for the fun part – Refinishing.

This long-forgotten unloved bundle of parts were found in a very dirty state. It is a testament to the original blacksmith that the parts had not suffered during the decades of neglect. The ironwork on this candelabra has many signs of the hammering, working and other skills used by the person who made it over 100 years ago.

The refinishing would comprise a thorough cleaning and a rub down with wire wool to remove the time baked grime followed by light burnishing to reveal the numerous hand made features of the candelabra.

After a wipe down with cleaning oil, the final finish comprised of a couple of coats of quality dark wax. Wax and antique metalwork go together really well. Wax protects and brings out the surface detail on old metalwork allowing the small details of the material and manufacture to really shine. 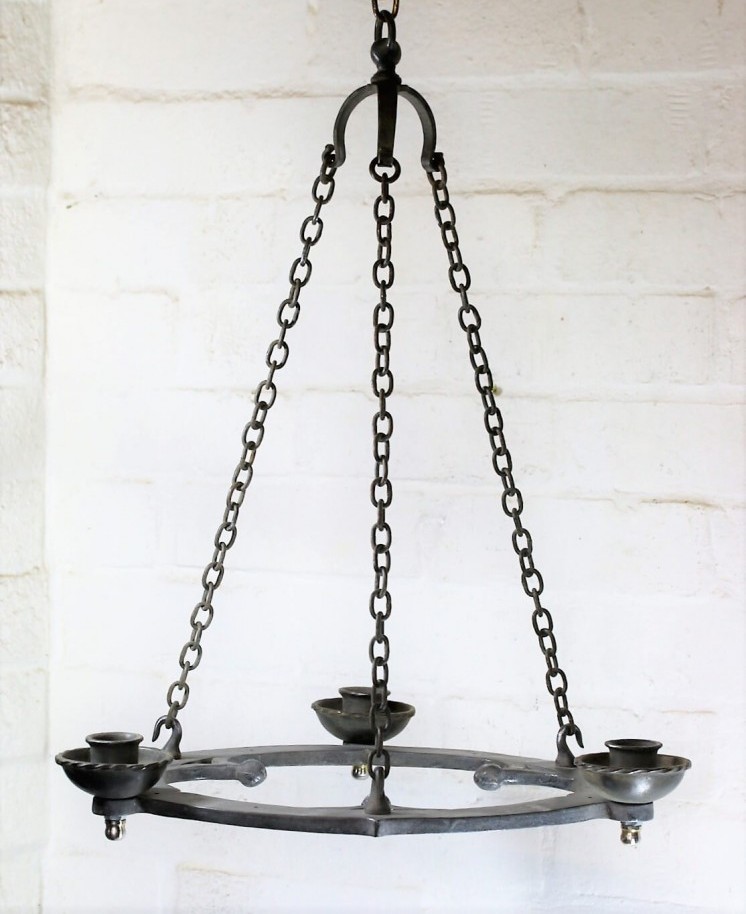 Here is the Antique candelabra assembled and refinished.

The details & skills of the original maker now really start to show and the more modern brass finials blend in fairly well having been heavily burnished and waxed. The Candelabra has some wonderful Antique details. 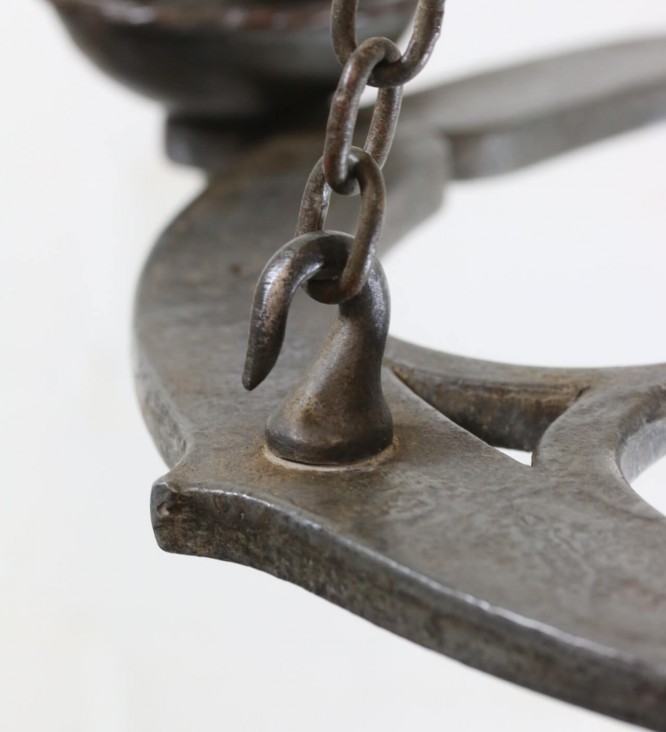 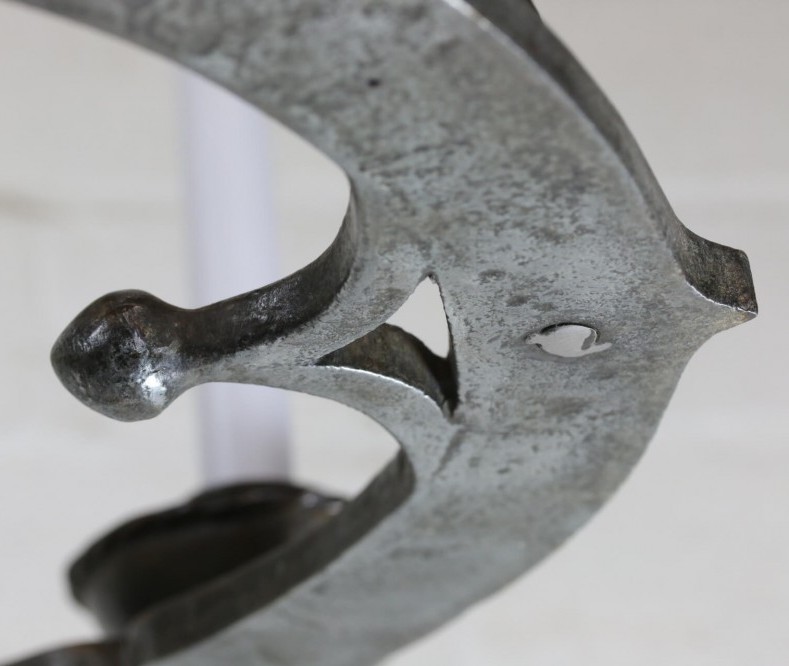 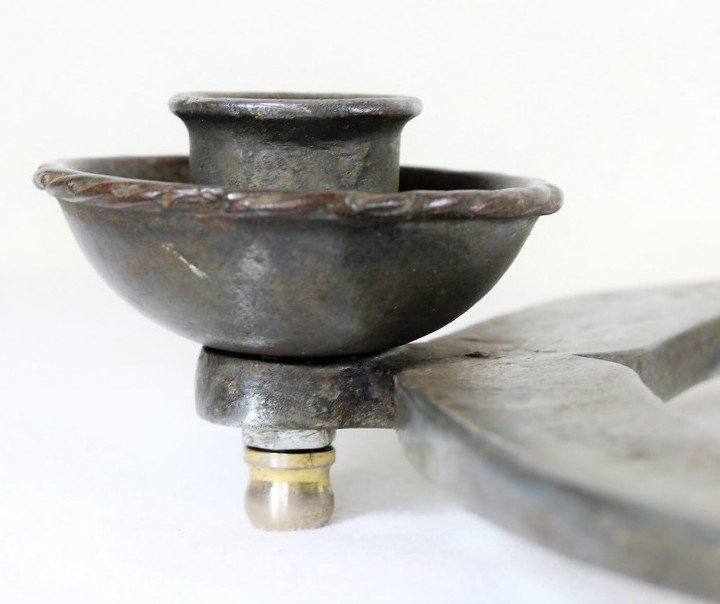 I hung the reborn candelabra chandelier and set three white pillar candles into the cups, once lit the candelabra looked really good, it was easy to imagine this in use over a hundred years ago and I wondered what scenes it had been witness to over its lifetime. 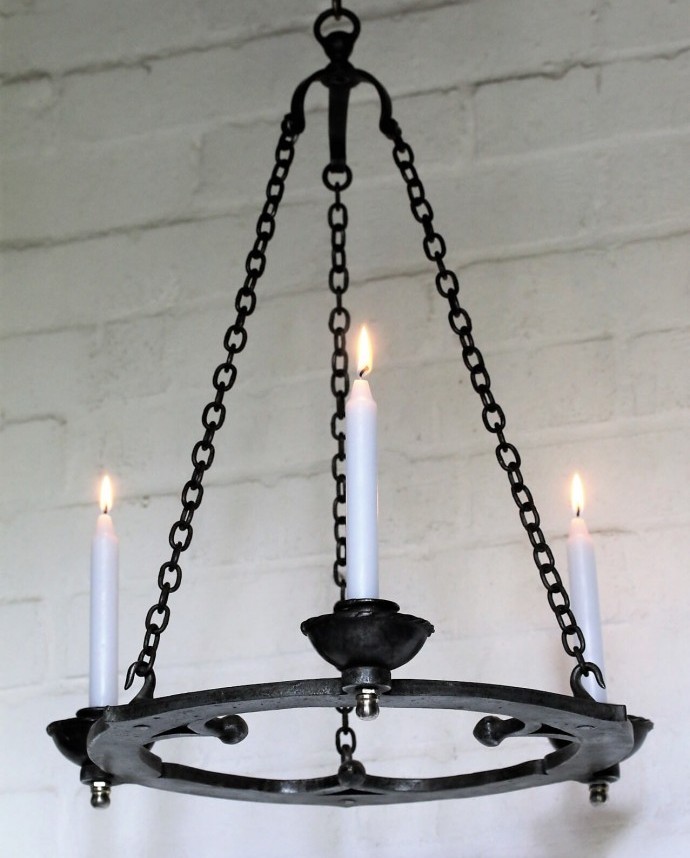 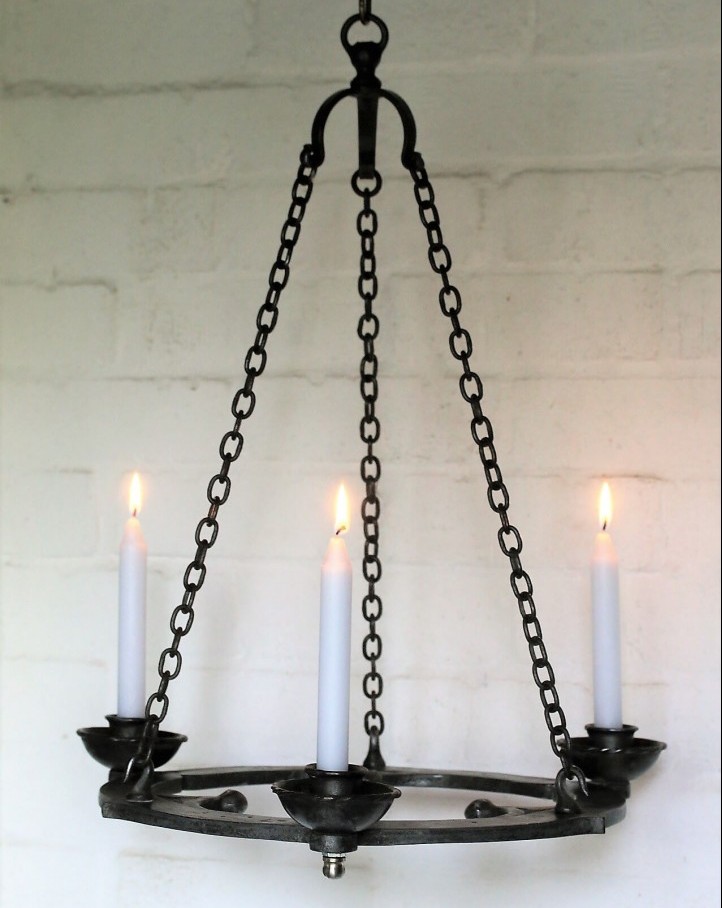 I had great fun making something from these wonderful old bits and pieces, I am really happy with the end result which is an Antique candelabra that will easily survive another 100 years of use.

Time Spent on the candelabra – 3 Hours.

I would love to hear from anyone who has performed a similar restoration project; it’s always great to share ideas with other people.

If you have any questions or need advice on any item of Vintage lighting please contact me and I will do my best to help.