“Retro” as defined by the Oxford English dictionary – Imitative of a style or fashion from the recent past.

During the 1950s cold war had really taken a grip, the space race & Atomic arms race had become reality and were in the news and in public awareness.

Interior Designers, Architects, & Industrial designers were using Atomic Science, Space Age and modernist themes in their designs. This lead to household items and of course lighting being produced in radical new designs and patterns.

The Sputnik/Atomic era was born. During this period lighting designers in the UK, USA, Scandinavia & Europe embraced the Sputnik theme and produced lighting that was completely different to the more common Deco inspired and Traditional designs of the day. This is when “Retro” Lighting really took off.

Italian designers such as Stilnovo were at the forefront of this movement towards Modernist lighting and Italian lamps from the 1950s Space Age era are very striking and even today look modern and contemporary. 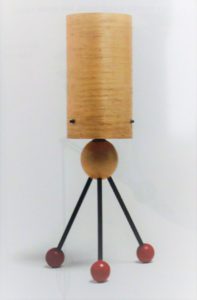 Danish companies were also cutting edge with companies such as Lyfa incorporating new materials and designs to suit the new trend.

A 1950s Atomic Era Lamp with a space age profile. 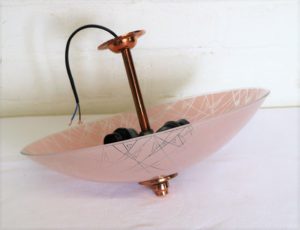 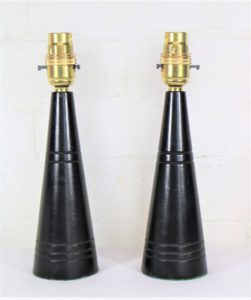 A pair of British Atomic table lamps with a distinctly Rocket shaped design and profile. 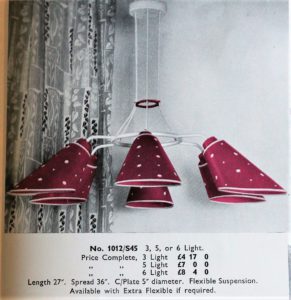 Radical shapes and bright and colourful elements started to appear in British 1950s lighting as this 1955 catalogue page shows.

In America the “Hollywood Regency” design era was still prominent and many beautiful and opulent designs were produced many by companies such as Stiffel. In America the Atomic Era was evident in extravagant and full on detail. 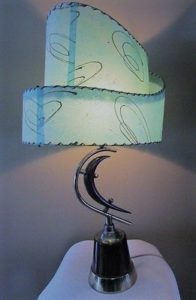 Finding good quality and good condition 1950s lighting is becoming more difficult with each passing year. Many 1950s fittings were disposed of as the fashions and designs passed and went out of favour.

Many fittings were made of lightweight materials and did not have the build strength to survive the decades,

The first and most important thing to check on any older light fitting is the wiring & lamp holders – Standards have changed over the decades so bear in mind that you may need to invest in having your 1950s find rewired or checked over.

Some lighting of this period seemed to be produced with the design being more important than actual practicality so check that the lamp or light fits in with your environment and intended use.

Is it really 1950’s? Many of the lights that were designed and started production in the 1950s were still available into the next decade. Many lovely pieces of old lighting have no makers names or clues as to where or when they were made, as you search for the piece that suits you will get a feel for ages and designs.

TIP – If you see a piece of 1950s lighting which fits your requirements just buy it, don’t worry that it may be slightly later or earlier than the 1950s, once it is hung/positioned and switched on the actual date becomes an irrelevance.

If you have any questions or need advice on any item of Vintage lighting please contact me and I will do my best to help.